As yet, there is no evidence that increasing the population of bats in an area will reduce the numbers of mosquitoes enough to affect human biting rates.  Recent studies at UW Madison (Wray et al. 2018; https://doi.org/10.1093/jmammal/gyy044) have confirmed that bats will eat many kinds of mosquitoes but a quantitative assessment hasn’t been completed.

The claim that bats are particularly valuable as mosquito predators may have started with a mistaken assumption based on a real scientific finding in the laboratory.  Research conducted in the late 1950s showed that bats released in a room filled with mosquitoes could catch up to 10 mosquitoes per minute (Griffin et al. 1960).  The results have been extrapolated to suggest that wild bats can consume 600 mosquitoes per hour. Using that figure, a colony of 500 bats might remove 250,000 mosquitoes each hour and theoretically afford mosquito control for an entire neighborhood.  However, a bat’s behavior when locked in a room with nothing to feed upon but mosquitoes tells us nothing about behavior in the wild where the community of insects that can serve as food is much more varied. 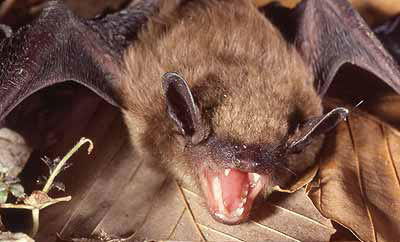 The diet of wild bats has been analyzed by dissecting stomach contents or examining fecal pellets. This research has shown that insectivorous bats are opportunistic feeders and that mosquitoes usually make up a very small percentage of their natural diet.   For example, a look at fecal pellets for the little brown bat showed 71% small moths, 16.8% spiders and 1.8% mosquitoes (Whitaker and Lawhead, 1992) while the diet of the big brown bat was dominated by beetles and caddisflies (reviewed in Agosta 2002).  These studies do not support a critical role for mosquitoes as a dietary item for bats, nor an important role for bats in removing mosquitoes through predation.

Some of this information was modified from http://www.rci.rutgers.edu/~insects/proprom.htm

Purple Martins do not control mosquitoes.

Sometimes you read that “a Purple Martin will eat 2,000 mosquitoes a day and up to 14,000 when the insects are extremely plentiful”. But this statement is based on an estimate of the number of mosquitoes that would be required to sustain a purple martin, 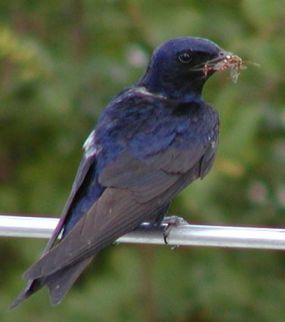 not on any actual analysis of the natural diet. Studies of wild birds show that mosquitoes form an insignificant portion of the Purple Martin’s diet (Griffin 1968, Johnston 1967).

Some of this information was modified from http://www.rci.rutgers.edu/~insects/proprom.htm 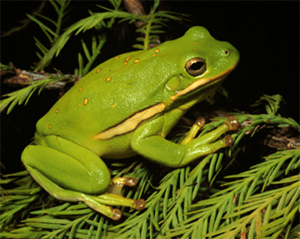 Adult frogs eat a variety of things but there is no evidence that mosquitoes are an important part of the adult diet of any species. Tadpoles of most frog species do not feed on mosquito larvae (the immature stages that live in water). Instead, most tadpoles are general herbivores and suspension feeders. However, a few species are able to feed on small invertebrates and other tadpoles. Predation on mosquito larvae has been documented by tadpoles of the North American species Scaphiopus hammondi (spadefoot toad) (Barber and King 1927), Hyla cinerea (Green treefrog) (Ritchie 1982) and Hyla septentrionalis (giant treefrog) (Spielman and Sullivan 1974), as well as by other species in other parts of the world [Bufo viridis (European green toad), Lechriodus fletcheri (sandpaper frog); Rana tigrina (Indian bullfrog), Anotheca spinos (coronated treefrog)].

We know little about how tadpoles interact with mosquitoes in natural settings. Barber and King (1927) reported that spadefoot toad tadpoles were effective predators on Aedes dorsalis in nature in New Mexico. Experimental tests of tadpoles for mosquito control suggested that they might reduce mosquito populations but this work has been carried out in artificial containers (Ritchie 1982; Spielman and Sullivan 1974; Willems et al. 2005).

Although only a few types of tadpoles will eat mosquito larvae, some tadpoles may compete with larvae for food (Blaustein and Margalit 1996; Mokany and Shine 2003a). In one study, the presence of tadpoles meant that mosquitoes had a harder time getting enough food to survive and turn into adults. In a second study, a frog tadpole was host to another organism (a fungus or yeast) which lived harmlessly in the gut of the tadpole. However this fungus inhibited mosquito growth when tadpole and mosquito were in the same pond (Mokany and Shine 2003b). Experimental releases of tadpoles for competition could have broad appeal owing to conservation concerns for this group of vertebrates (Lounibos 2007). Local regulations must be followed when considering introduction of any vertebrate or invertebrate species.

One type of turtle, the red-eared slider (Trachemys scripta) has been used for control of mosquito larvae. 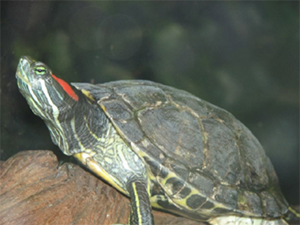 In a community in Honduras, each cement water-storage tank received a single 6-12 month old turtle. Turtles did well in the tanks and provided complete control of mosquito larvae (Marten et al. 1992, Borjas et al. 1993). In the USA, turtles were introduced into an experimental enclosure of a roadside ditch in Louisiana, for control of Culex larvae (Marten 2007). The investigator reported that the turtles reduced the number of larvae by 99% by the 5th week of the study. Practical issues related to the use of turtles for biological control are discussed in Marten (2007). The need for supplemental feeding and the ability of turtles to move away from the area are two potential issues. The researcher suggests that turtles might be useful in isolated water bodies such as retention ponds where the turtles would have little motivation to leave and supplemental food could be provided if necessary. Local regulations must be followed when considering introduction of any vertebrate or invertebrate species. 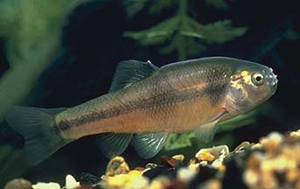 Many types of mosquito-eating fish have been used in control programs across the world (Walton 2007). Currently, the use of fish is tempered by two concerns. First, introducing non-native fish can have dramatic consequences on the aquatic environment. Non-native fish can outcompete native fish leading to local extinction or population reductions. They can also have dramatic effects on other non-fish species, especially in habitats that lacked fish before the introduction. In some areas, fish that are native to an area are useful for control and sometimes these are even provided by local mosquito control districts. A second concern, however, relates to the introduction of disease organisms when transplanting native fish from one area to another. For example, in Wisconsin, viral hemorrhagic septicemia is a particular concern as it is a disease that can wipe out fish populations. Movement of fish in this state requires that the fish be certified as disease free. Local regulations must be followed when considering introduction of any vertebrate or invertebrate species.

Blaustein L. and Margalit J. 1996. Priority effects in temporary pool: nature and outcome of mosquito larva-toad interactions depend on order of entrance. Journal of Animal Ecology 65:77-84.

Mokany A. and Shine R. 2003b. Biological warfare in the garden pond: tadpoles suppress the growth of mosquito larvae. Ecological Entomology 28:102-108.